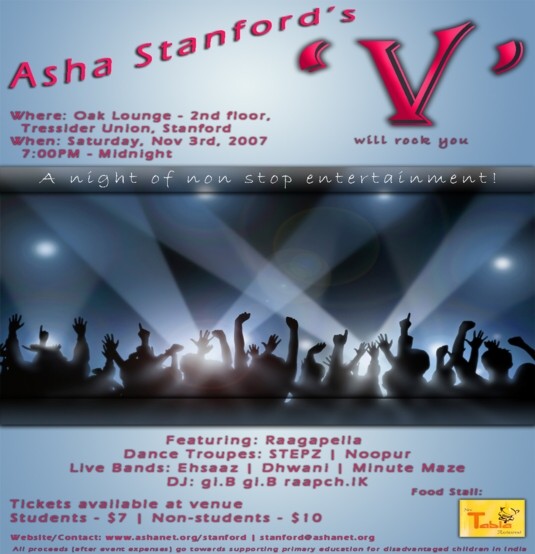 V’ will rock you – A musical night! View pictures from the event

This event was covered by ‘The Stanford Daily’ on 11/05/2007 by Rahul Kanakia. This content originally appeared here.

Hundreds of people crowded into Tresidder’s Oak Room on Saturday for a benefit concert hosted by Asha Stanford, a student group dedicated to improving education in India. The concert, which consisted of rock, classical Indian and fusion music by Indian groups from around the area, marked Asha’s attempt to branch out into undergraduate life after years as a group mostly populated by international graduate students.

The concert featured performances from Stanford’s Raagapella, a South Asian a capella group, as well as dance and musical performances by neighboring troupes.

“We feel that by donating our performance to this fundraiser we’re supporting a good cause,” said Raagapella member Hirav Gandhi ‘10.

Koussalya Balasubramian, a second year master’s student in electrical engineering and Asha Stanford’s calendar officer, was excited by the turnout.

“It’s just great,” Balasubramian said. “We have been putting a lot of effort into this on very short notice. But people are cheering and they’re having a great time.”

The event also included many participants from outside the student community, including Amol Phadke, 30, who came because he had heard of the cause.

“They do really good work,” he said. “And I really liked it, the bands were great.”

Asha Stanford, which is part of Asha for Education, a broader organization including more than 66 chapters in the United States, Europe, India, Singapore and Australia, will invest the proceeds from this concert into Indian non-governmental organizations (NGOs) that seek to improve literacy in India.

Until this event, Asha Stanford’s primary fundraising tool was a spring gathering to celebrate Holi, the Indian “Festival of Colors,” that is traditionally celebrated by throwing colored water and paint on other participants. Asha’s Holi event usually draws 2,000 to 3,000 people from around the Peninsula and East Bay and its entrance fees account for most of the $30,000 that the group donates each year.

Rowza Tur Rumma ‘10, Asha Stanford’s publicity coordinator, explained that this year, however, the group decided to hold a fall concert in order to reach out to undergraduate community members.

“The basic problem we have is that so far Asha has been mostly grad-run. I’m in fact the only undergraduate member,” she said. “And we haven’t had much ability to connect with campus. We’re looking to broaden the scope of participation and reach out to both Indians and non-Indians.”

Asha for Education was founded in 1991 by two UC-Berkeley graduate students, and the Asha Stanford chapter was started the following year. The group mostly focuses on literacy programs among the underprivileged within India, especially women and tribal peoples.

Rumma explained why the members of her group were so dedicated to this cause.

“We are all at Stanford,” she said. “All of us have worked hard all our lives because we know the importance of education. We believe that literacy can create socioeconomic change. It can be one of the strongest tools in progressing a developing nation.”