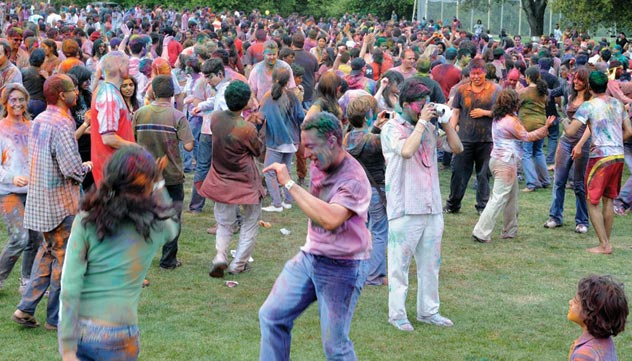 Siliconeer, the monthly magazine for South Asians in the US, covered Asha Stanford Holi in their February 2009 edition. This content originally appeared here.

Asha Stanford, a non-profit volunteer group catalyzing socio-economic change in India through the medium of education, plans its annual Holi, the Indian spring festival of color March 28. Located at Sandhill Fields on the Stanford campus, the event will be the Bay Area’s largest Holi, expected to attract over 3500 individuals. All proceeds will benefit Asha Stanford’s education projects in India.

Originally a festival to celebrate good harvests and fertility, Holi heralds the onset of spring through a riotous celebration of color. The festival affords a moment to overcome caste, creed and economic barriers in the greeting of fellow revelers with gulal, the colored powder, often mixed with water, which Holi-goers characteristically shower upon each other. Associated with much Indian mythology and legend, Holi is celebrated throughout India in parks, town squares and other public spaces where large crowds gather to play to the accompaniment of folk music.

Asha Stanford organizes an analogous event at Stanford with much color, water, popular Bollywood and Indian dance music and food for the enjoyment of Bay Area professionals, families and students. Last year’s Holi saw 3,000 people shedding inhibitions for a day of flirtatious throwing of color and dousing with water.

Asha Stanford, a local chapter of Asha for Education, seeks to make education available to all children in India by funding projects such as primary schools and teacher training workshops. The organization is volunteer-based and zero-overhead such that all proceeds from the event will be disbursed to local non-governmental organizations (NGOs) and schools working to provide education to some of India’s most under-privileged youth. All Asha Stanford projects are strictly secular and non-discriminatory and great priority is afforded to schools in rural and as-yet-untouched areas. Holi Tickets may be purchased online at www.ashanet.org/stanford.